In contrast to their nearest great ape relatives, who all live in the general vicinity of the equator, humans have spread out all over the globe. To deal with everything from the Arctic to the tropics, humans have evolved a highly flexible suite of sociocognitive skills that enable them to create, in concert with others in their cultural groups, a variety of techniques for coping with the challenges of their particular local environment, from building igloos to tracking large game.

To take advantage of the group’s accumulated knowledge and skills, developing children must possess species-unique skills of cultural learning.

Together with Ann Cale Kruger and Hilary Horn Ratner, I proposed a theory of cultural learning in 1993. We proposed three basic types (see fig.): imitative learning (by copying others), instructed learning (by assimilating what adults teach), and collaborative learning (by learning from a collaborative partner). Much has changed in the 20+ years since this theory was first proposed. Here we summarize some of the most important new findings and perspectives. 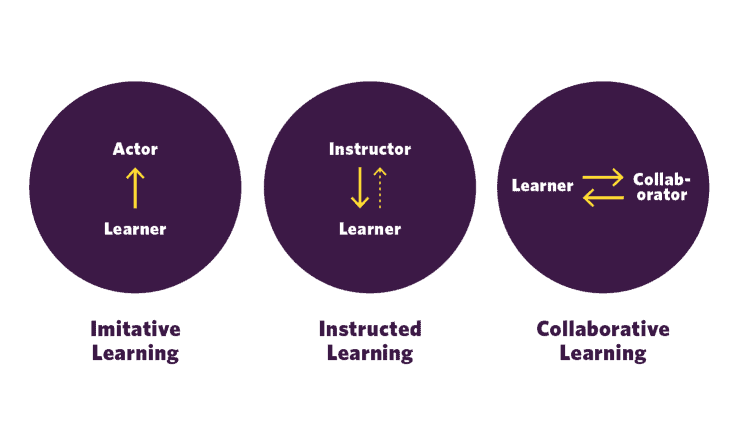 Children are quite good at imitatively learning effective ways of doing things by observing others. But chimpanzees are pretty good at this also. Two key aspects of the process distinguish children. First, imagine that a human adult pushes a button that activates a machine. Children as young as one-year-old will very likely imitate the process, as will chimpanzees.

Now imagine that before pushing the button the adult swirls her hand in the air and makes a noise as he pushes the button. Many young children will imitate not only the button pushing but also the swirling hand and noisemaking. Chimpanzees will imitate only the button pushing and will ignore the extra actions. One hypothesis is that chimpanzees are engaging in a kind of instrumental imitation – trying to find effective ways of doing things – whereas children are doing not only this but also trying to be like adults, to affiliate with them and join into the group by acting like them. This process is sometimes called social imitation.

“Students benefit when they are given more responsibility”

‘Let me show you’: The benefits of collaborative learning

Here’s a second difference. Imagine that both a child and a chimpanzee have learned an effective way of operating a toy to get a reward. Then some peers come in (either child peers or chimpanzee peers) and operate the toy in a different way and get the same reward. Given another turn, many children will switch to the way they observed others doing it, whereas chimpanzees almost always stick with what worked for them before.

Something similar happens when children make a judgment, for example, which of the three sticks is taller, and then other children disagree with them. Many children will change their minds and conform to the group, especially if the group is watching. Again, the point is that children imitate not just to learn new skills but also to be like others and to fit into the group.

On animal television shows, the voiceover quite often describes the situation in which a mother chimpanzee fishes for termites while her infant looks on as: the mother is teaching her child to fish for termites. But she is doing nothing of the kind. She is fishing for termites, and the child is watching. Chimpanzee mothers do not do things and show things to their children for their benefit. Humans are the only primate species that actively instructs their young. This is because human youngsters have so much they must learn to function successfully in their cultural group.

“Human youngsters have so much they must learn to function successfully in their cultural group.”

With instruction, adults actively expect children to learn. There are very large cultural differences in the way that instruction takes place. The Western prototype of verbal instruction in the classroom is very far from universal. More common is a more informal pedagogical setting in which adults engage in some daily activity, for example, making tortillas, and children are expected to watch and learn. The expectation is important because it sets up a particular mindset in the child. That mindset is that the adult is conveying generalized cultural knowledge.

When the adult tells the child “Don’t eat these berries”, in some cases she means not to eat these particular ones now, so as not to spoil the appetite; but when she is engaged in pedagogy she means don’t ever eat this kind of berry (as it is poison). The marker for much of this kind of pedagogy is so-called generic language like “These berries are poison” or “It’s not done that way, but this way”. This is the voice of the culture telling the child important things about life.

When two children solve a problem together, it is sometimes the case that they produce solutions that neither could produce on its own. They take one another’s perspective and so understand the problem more deeply. In more creative contexts, children can even make up together rules of the game that they all agree to follow.

“Human children do not just learn to act like others in their culture, they conform to the culture’s expectations.”

They then go on to normatively enforce these rules on any new participants: you have to do it this way. Enforcing rules on others, and teaching them better ways of doing things, is the child taking the perspective of the cultural group and what is best for all. In this way, young children become not just consumers of culture, but also active participants in its creation and maintenance.

And so to summarize: Human children do not just learn to act like others in their culture, they conform to the culture’s expectations. Indeed in many cases they themselves contribute to the creation of such shared expectations. This is exactly what one would expect from a creature adapted for living in a cultural group in which everyone depends on everyone else for learning how to live.

You may also like to read our interview with Michael Tomasello about fairness.