Today, little is known about the relationship between infants’ language experiences when they are awake and the length and frequency of periods of sleep. But recent research in adults suggests that the amount of sleep at an early age is directly related to infants’ language development.

Around the time of their first birthday, infants sleep an average of 14 hours per day, taking one or two daytime naps as well as sleeping at night. During their waking hours, they are exposed to large amounts of new information, which provides the foundation for cognitive and language development. Every day, infants hear a large number of words as they encounter new objects or events, and they learn to associate these words with their meanings as well as to vocalize them.

A wealth of studies in adults has shown that taking a short nap or sleeping through the night after learning novel information (such as new vocabulary or motor skills) promotes the long-term storage of that information. Fresh memories are highly susceptible to forgetting, and new experiences can easily overwrite the original information. Memory traces are repeatedly reactivated during sleep, which is believed to stabilize the reactivated memories.

“Memory traces are repeatedly reactivated during sleep, which is believed to stabilize the reactivated memories.”

In my first study on infant sleep-dependent memory consolidation, conducted in collaboration with Manuela Friedrich and Angela Friederici of the Max Planck Institute for Human Cognitive and Brain Sciences in Leipzig and Jan Born of the University of Tübingen, we sought to determine whether a short nap after being exposed to new word meanings contributes to infants’ retention of lexical memories.

To test this, we presented infants with pseudowords (such as “Wiemel”) as labels for new objects or as names for a category including similar objects (in the figure below you can see how a category was encoded in our experiment, which corresponds to the encoding of a category in real life), measuring the response of the brain using electroencephalography (EEG). The detection of specific components in the event-related potential (ERP), e.g, the presence of the so-called N400 component, provides information about whether or not the words have been successfully encoded as labels for the objects or as a category.

The study included 100 infants between the ages of 9 and 16 months. About half of them took a short nap after the learning session, while the others remained awake. Approximately 1.5 hours after initial learning, the infants were exposed to the previously encoded objects as well as to new exemplars of the recently presented categories to test the generalization of their knowledge (the figure below also shows an example of a new exemplar of an encoded category, which corresponds to encoded categories in real life). 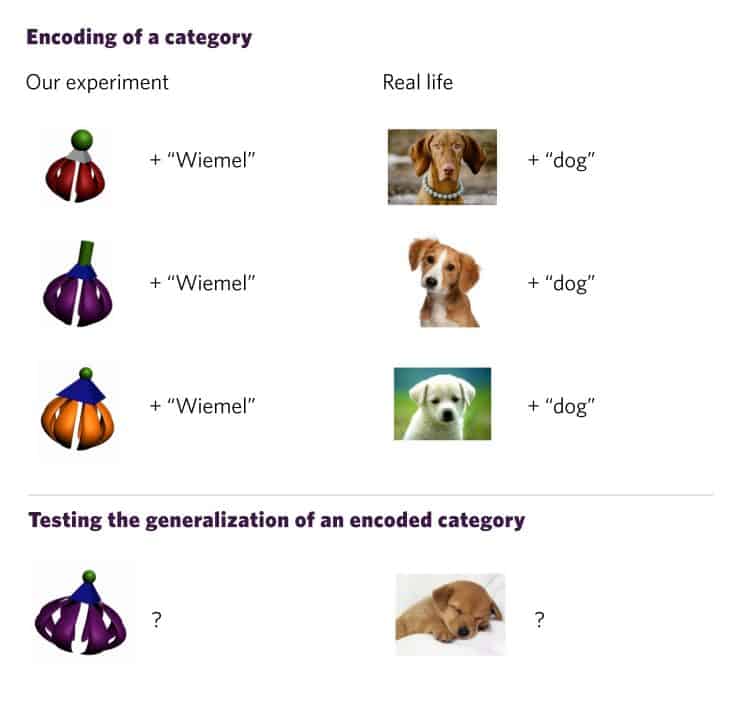 The figure illustrates how young children learn to recognize categories, using an example from our experiment and another from real life. When children see an animal and hear others refer to it as a “dog,” they learn what “dog” means in this context. Later on, when they encounter similar animals that are also called “dog,” they realize that “dog” is not just the name of one animal, but the term for a group of similar animals that share certain features: they all bark, and they have ears, four legs and a tail.

Their brain responses clearly indicated that the infants who had napped after learning, but not those who did not nap, remembered the previously learned object-word associations. Even more strikingly, infants in the napping group were able to generalize their knowledge to new category exemplars; here, again this was not the case for the infants who had stayed awake.

In sum, our study shows that a short nap during the day can indeed improve an infant’s language learning by promoting the long-term retention and generalization of new word meanings encoded during the time just before the nap.

Why do children learn the words they do?

“Babies’ brains are equipped to handle more than one language”