Economic and social inequality is one of the main problems that Latin America has historically faced. When it comes to the intergenerational transmission of inequality, however, recent evidence shows an encouraging trend. Over the last decades, educational mobility has increased in most countries in the region.

This encouraging picture is reflected in a recently published study of intergenerational social mobility in Latin America. The study, which incorporated more than 50 household surveys in 18 countries, allows for comparisons across countries and over time. The findings are now publicly available on a website that enables researchers to draw comparisons and identify trends in intergenerational social mobility over the past 50 years.

Most past studies have shown that intergenerational mobility has historically been low in Latin America. The new findings confirm this picture for older cohorts. However, mobility is on the rise in most Latin American countries, driven by an increase in access to education for children from poor families. The mobility of younger generations of Latin Americans is similar to that of their peers in developed countries such as the United States. 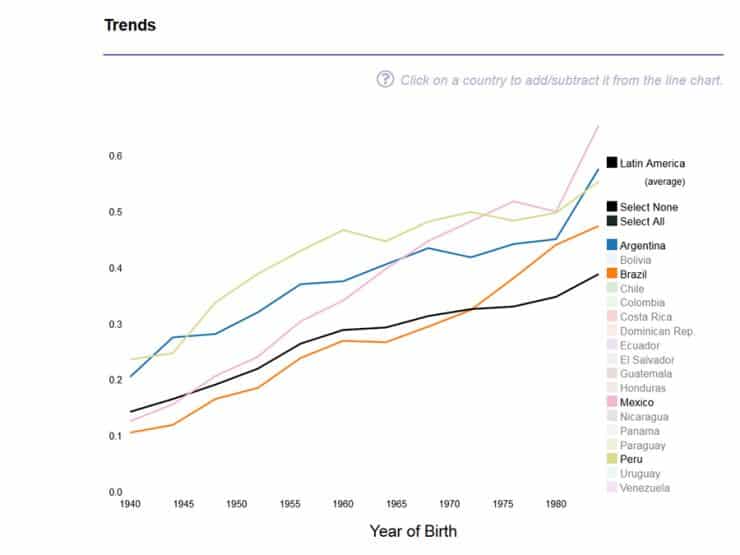 Over the past 50 years, the likelihood that an individual from an educationally disadvantaged background would graduate from secondary school has more than doubled across the region, from just 15 percent for people born in the 1940s to almost 40 percent for those born in the 1980s.

Yet regional averages conceal substantial differences between countries. Although there was an increase in upward mobility for educationally disadvantaged families in most countries – including Brazil and Mexico, where mobility almost tripled – this pattern is not found in Central American countries such as Guatemala, Honduras and Nicaragua, where social mobility is still at low levels and has remained virtually unchanged over time. In contrast, the upward mobility of younger cohorts in Argentina, Mexico, Peru and Venezuela is high and substantially above the regional average. 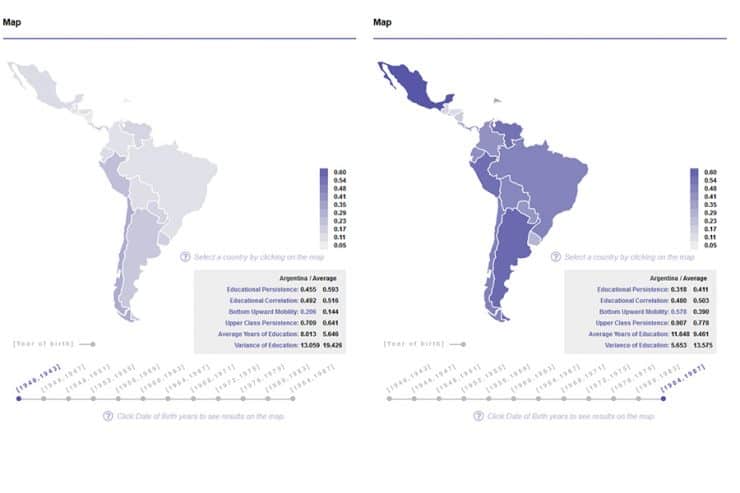 The Latin American region overall has been relatively successful at promoting upward mobility. At the same time, the likelihood that families near the top of the distribution will stay there has remained high throughout the study period. On average, the probability that the children of highly educated parents will complete secondary school is around 70 percent. This pattern is found in most Latin American countries, with probabilities that exceed 85 percent for the youngest cohorts in Argentina, Bolivia, Chile, Ecuador, Mexico and Peru.

In summary, most Latin American countries have seen a marked improvement in the educational attainment of people with limited economic resources, despite the fact that those from high-income families have continued to attain high levels of education. However, this improvement has not been seen in some countries, where lack of access to education for low-income families is still a major problem.

“Most Latin American countries have seen a marked improvement in the educational attainment of people with limited economic resources.”

Another recent study reveals a connection between two phenomena that may explain why some countries in the region have followed such different paths. It found that in Latin America, greater income inequality in childhood is associated with lower rates of intergenerational mobility in adulthood. In most countries in the region, periods of greater income inequality are associated with less opportunity for disadvantaged children to rise above their parents’ socioeconomic status, while the chances that children of highly educated parents will improve their status have even increased. When income inequality declines, children from disadvantaged socioeconomic backgrounds benefit most in terms of upward mobility.

Time series for multiple countries make it possible to explore other associations between mobility and macroeconomic or institutional conditions. For instance, intergenerational mobility is not only correlated with income inequality; it is also positively associated with economic growth and negatively associated with poverty. Moreover, there appears to be a positive association between intergenerational mobility and public spending on education, and this association is especially strong when it comes to spending on primary education.

“We must not ignore the less encouraging situation in certain Central American countries and the fact that throughout the region, children of highly educated parents tend to maintain their high status.”

It is also interesting to examine gender differences in trends in intergenerational mobility. While evidence suggests that among older cohorts in Latin America, men have benefited from greater mobility than women, the gender gap has narrowed over time and even completely vanished in some countries. This can be explained in large part by the convergence in recent decades in the number of years of education completed by men and women.

It is clear from these findings that intergenerational educational mobility has improved in Latin America. However, we must not ignore the less encouraging situation in certain Central American countries and the fact that throughout the region, children of highly educated parents tend to maintain their high status. The persistence of such high status leads to unequal opportunities in the labor market and perpetuates the high levels of social inequality that the region has historically suffered.

The pandemic widens the attainment gap