Sabine Gysi: How did you happen to get involved with the “Balu und Du” (Baloo and You) mentoring program?

Fabian Kosse: While I was writing my undergraduate thesis in Mannheim in 2009, I met James Heckman. I was very interested in his approach to skill development. Later on, in Bonn, Armin Falk and I decided to expand our research to include not only the commonly studied cognitive and noncognitive factors, but also the components of preferences and personality.

After writing several mainly descriptive papers, we realized that we needed causal evidence. When we enrich a child’s social environment in a randomized controlled trial, what effect does this have on personality and skill development?

While looking for an appropriate program that enriches children’s environments, we came across “Baloo and You“, which was initiated by Prof. Müller-Kohlenberg, a psychology professor from Osnabrück. She recognized that a program of this kind might benefit from external evaluation.

SG: When was the Baloo and You program created?

FK: In 2002. When I began to study it, it had already been in operation for nearly ten years.

We wanted to learn more about its long-term effects. Some effects on schooling and subsequent labor market success may disappear or become apparent only later on. The idea is to follow the participants until adulthood. This year the participants are between age 12 and 14. There is still a long way to go, but we are committed to our goal.

SG: In the Baloo and You mentoring program, meetings take place only once a week. The environment in which a child grows up has an enormous impact. What difference can a once-a-week meeting make?

FK: That’s a very intriguing question. It’s obvious, first of all, that such meetings will not be able to solve every problem. But we are finding that they have very strong effects on the prosocial dimension and help to close the developmental gap between children from different social environments.

We collected a rich dataset to further explore mechanisms and ways in which the program benefited children. This will be very important in determining the direction in which research should move over the next few years. Our goal is not just to conclude that something works, but to explain how it works. The psychology literature of the 1960s and 1970s has shown us that social behavior is largely learned through interaction. Low-SES mothers are less prosocial; they offer less direct feedback regarding their children’s behavior.

Mentors serve as strong role models because of their prosocial personalities. And the very act of mentoring is very prosocial. Mentors meet with the children once a week, volunteering their time without any financial compensation. And they come back again and again. This communicates to the children that the mentor-mentee relationship is important. At the same time, the mentors model appropriate behavior.

To get back to your question: When children grow up without receiving prosocial stimuli in their family environments, exposure to a prosocial role model shows strong effects. Although their meetings take place only once a week, mentors can make a real difference in how children see the world. Interactions with mentors can provide children with a very different perspective.

It is also important to remember that children go through certain critical phases of development, certainly when it comes to the development of personality and skills. In terms of a child’s social behavior, the course seems to be set during the primary school years. That is why we decided to focus on this period. It would, of course, be interesting to know what would happen if the program were to begin a year earlier or later. But I believe, and the data confirm, that we have done a good job of targeting the most sensitive period in a child’s development.

SG: Do you think that peer mentoring has a substantially greater impact than authority figures, such as teachers?

FK: It’s difficult to speculate. At any rate, the psychology literature suggests that the strong impact of mentoring can be largely attributed to the peer aspect.

Mentors in the Baloo and You program have considerable freedom. But they are guided by a kind of mission statement: For Baloo and You, a mentor is someone with a certain amount of authority, but most of all someone who acts as an older, reliable friend. While the children are conscious of the fact that their mentors are ten or fifteen years older than they are, interactions take place at their level.

SG: What would it take to introduce a program like Baloo and You nationwide, for example in Germany?

FK: An advantage of this program is that it costs very little – between 800 and 1,000 euros per child and year. That’s nothing, compared with many other social programs. Eighty percent of that amount is spent on coordinators with a background in educational methods or psychology, who provide support for the mentors. They step in if problems arise in the mentor-child relationship.

It’s important to note, however, that it’s not so easy to find a large number of mentors. We need volunteers who are willing to devote a considerable amount of their free time – one afternoon per week – to a child, without monetary compensation. For a large scale rollout of the program you have to find enough volunteer mentors. It is possible, but not a trivial challenge. The program has grown considerably, and it is in operation at multiple sites. 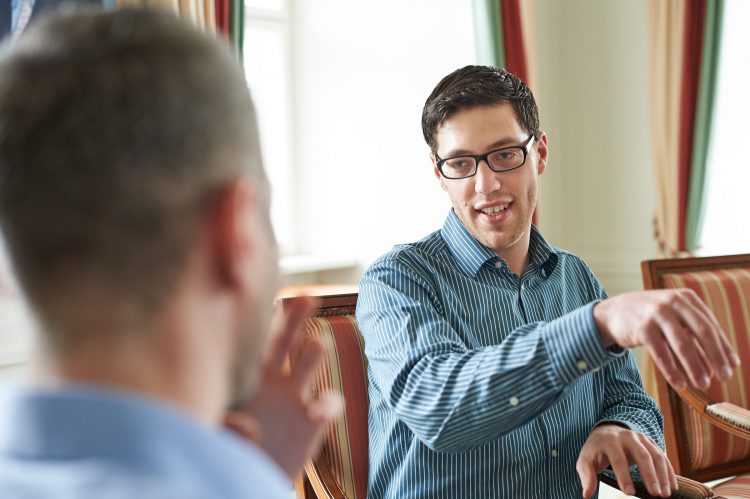 SG: How were the mentors for Baloo and You recruited?

FK: As with many social programs, certain structures and informal channels can be helpful. Often someone who has served as a mentor will spread the word to others. In our case, we had to take further steps because we needed so many people at one location – 200 mentors in the Cologne-Bonn region. We were given permission to contact all of the students at the universities of Cologne and Bonn. We sent out letters telling them about the program, and those who were interested got in touch with the organization that runs it (Balu und Du e.V.). Informal channels function in a very similar way. Hearing about the program at a party, for example, someone might respond, “That sounds interesting. Where can I get more information?”

SG: No doubt social media would be a good way to recruit mentors.

FK: That’s right. Social media could play a significant role in this process today. That’s especially true now that the initial results are in, and we know that the program is effective. People are more easily motivated when they know they’ll have an impact.

SG: Could a mentoring program of this kind also help to ease the challenges associated with increasing migration to countries like Germany?

FK: Yes, I would imagine that mentoring might help to integrate immigrants. There’s relatively little evidence in this area, but it would make sense to conduct more research.

A number of the aspects that relate to development might also be applied to integration. To stay with the “Jungle Book” image suggested by the program’s name: A person enters into an unfamiliar world. A mentor is there to provide advice and assistance – perhaps in finding a job, establishing a circle of friends, or other challenges.

Numerous social institutions and social entrepreneurs – such as “Rock Your Life!” – are considering establishing a branch that will also address issues of migration. This would offer an exciting new opportunity for us to conduct more research in that area.

SG: What’s next for your study?

FK: We’ve made it part of a panel study. Our analyses show further interesting effects. For example, children who have participated in the mentoring program are more likely to attend an academically demanding high school. We’re in the process of painting a more complete picture. For example, we’re observing improvements not only in the “personality” dimension, but also in hard factors such as decisions about a child’s educational trajectory. We want to compile the data and find out what caused children and families to pursue a different educational path. Given the number of factors that are involved, this is obviously a challenging task. Have the child’s educational aspirations changed? Did the teacher start to view the child differently? And so on.

We will continue our analysis to gain a better understanding of the development process of children and especially the origins of social inequality.

Dr. Fabian Kosse‘s fields of specialization are Economics & Psychology and Applied Microeconometrics. He is especially interested in how preferences, personality and skills are formed, with a particular focus on the role of the early social environment. In addition, he explores the consequences of individual heterogeneities for educational, health and labor market outcomes. In terms of methodology, he combines long-term field experiments with microeconometric panel data methods, incentivized measures and the use of biomarkers.

Baloo and You
The nationwide mentoring program “Baloo and You” in Germany provides support for primary school students outside of the school context. Dedicated young people commit themselves to mentoring an individual child for one year. Through personal attention and leisure-time activities, the mentors help the participating children develop in our society and learn to meet the challenges of everyday life. The mentors, called “Baloos” after the character in Kipling’s “The Jungle Book,” are assisted by trained staff who are always available to offer advice. Children who are in special need of support may be recommended for participation in the Baloo and You program by their primary school teachers.

More about Baloo and You (in German)