An obstacle to constructive observation and research
by Marc Bodmer
January 22, 2020 / 1 Comment

During the Pac-Man era, video games were still “cute.” Since the late 1990s, however, they have been linked to gruesome events in the minds of many people: On April 20, 1999, two teenagers, Eric Harris and Dylan Klebold, shot and killed 12 students and a teacher at their high school in Littleton, Colorado, and injured many more – finally killing themselves. The Columbine mass shooting shocked the world, and the search for an explanation for that horrendous event began immediately. Why do schoolchildren kill other schoolchildren?

We learned quickly that the two perpetrators had been passionate gamers. They were obsessed with playing Doom (1993), a computer game in which players go hunting for horrific monsters. Journalists, and subsequently politicians, zeroed in on two facts: In Doom, everything that moved was being shot. At a high school, a mass shooting had taken place. The conclusion was obvious – a violent game was responsible for the teenagers’ rampage.

“It would be a mistake to ignore the possible positive effects of these games, since they are not only virtually omnipresent, but also ‘learning machines’: Players who fail to learn will not advance to the game’s next levels.”

You never get a second chance to make a first impression. Ever since the shooting at Columbine High School, whenever a young person, and specifically a white male, has committed a mass murder, the media have posited a link between games and violence. Therefore, according to U.S. President Donald Trump, responsibility for repeated acts of violence in American high schools lies with computer games and movies, and not with easy access to weapons. For his part, Horst Seehofer, Germany’s Minister of the Interior, responded to a recent act of neo-Nazi violence by calling for authorities to take a closer look at the “gamer scene.”

Researchers, too, have tried to find causal relationships between violent games and violence in society. Studies have shown that such games have at most a marginal effect, one that pales in comparison to factors such as domestic violence and alcohol and drug abuse, as well as – in the school context – feeling humiliated by a teacher. If there were in fact a significant connection between violent games and real-life crimes, it would be evident from a comparison of youth crime in the United States and the increase in the number of violent acts depicted in video games. But this is not the case (graphic by Christopher Ferguson, 2014). 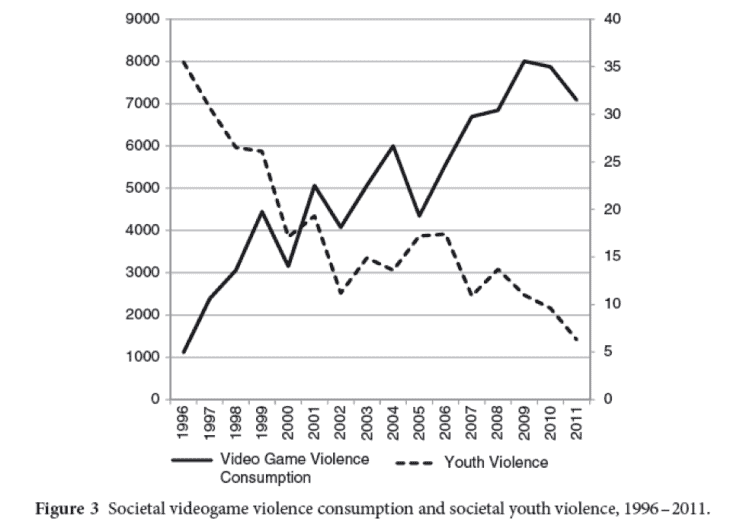 Christopher J. Ferguson, 2014, Does Media Violence Predict Societal Violence? It Depends on What You Look at and When, Journal of Communication

Nevertheless, non-players still worry about the potential consequences of consuming video games. The stigmatization of these games hampers constructive research. Yet despite such challenging conditions, cognitive neuroscientist Daphne Bavelier of the University of Geneva is doing groundbreaking work in this area. Bavelier, who received the Research Prize of the Jacobs Foundation in 2019, has demonstrated that playing action games – such as the notorious “shooter games” – can improve certain cognitive skills.

This finding could lay the groundwork for additional research. According to a study in Switzerland, the JAMES study conducted at Zurich University of Applied Sciences (ZHAW), approximately 90 percent of young Swiss males play video games on a regular basis. It would be a mistake to ignore the possible effects of these games, since they are not only virtually omnipresent, but also “learning machines”: Players who fail to learn will not advance to the game’s next levels.

The big question is this: How can the skills people learn by playing a game be used to benefit their day-to-day lives? Can hundreds of hours spent solving problems reinforce useful skills – skills that might, for example, have a favorable impact on a person’s career?

As Bavelier’s research has demonstrated, it is important to look beyond a game’s content. Playing computer games might, for instance, stimulate the regions of the brain that are responsible for solving mathematical problems.

“Can hundreds of hours spent solving problems reinforce useful skills – skills that might, for example, have a favorable impact on a person’s career?”

It is time for a second “first impression” of video games. We need to go beyond the shiny surface of these games, with their intergalactic shooters and fantasy role playing, and take a look at the fundamental principles behind them. For example, the “trial and error” approach can be helpful in problem solving, and players may develop certain vital skills, such as the flexibility that is needed to respond to ever-changing challenges, or the hand-eye coordination that practically every game requires in some form.

In his book “What Video Games Have to Teach Us about Learning and Literacy” (2003), American literature professor James Paul Gee points out that people who play computer games acquire a new form of literacy. What, exactly, this new literacy entails, and how it might benefit us, is a topic for future research.

HOW WILL WE USE TECHNOLOGY TO CHANGE OUR BRAINS AND BEHAVIORS?

with Daphne Bavelier and Amy Ogan

New technologies and artificial intelligence have an immense potential that can be utilized in very different ways. How will they affect children’s and young people’s learning and development? If the positive scenarios are to prevail, we need to understand the changes that are taking place and ensure that those changes have a positive effect. Two highly regarded researchers will join us to discuss this topic: Daphne Bavelier, cognitive scientist, and Amy Ogan, educational technologist. Moderator: Olivia Kühni. Language: English. Admission: free; register at veranstaltung@kosmos.ch

How video games could help teach adolescents about empathy