How are school to work transitions changing in England?

In recent years, there has been growing concern about the number of young people failing to make a successful transition from education into employment. Increasingly, this appears to be a structural, rather than cyclical, issue. We see evidence of this from the fact that although youth unemployment in the UK was falling in the late 1990s and early 2000s, it started rising again as early as 2004, long before the general downturn in the economy.

This is an important issue, not least because making a successful school to work transition is a good predictor for young people’s long-term economic success. Multiple studies have shown that periods of unemployment during these early years have long-term negative effects on later employment and earnings prospects.

The pandemic widens the attainment gap

As such, my colleague Richard Dorsett and I set out to explore how these transitions have changed for successive generations of young English people born in roughly 1960, 1970, 1980 and 1990. A lot has changed about labour markets over these thirty years. Many of these changes apply not just to England but also other developed economies. As such, our findings are likely to be relevant in other parts of the world too.

We analyse data on young people’s main activity each month between age 16 and 19, using statistical techniques known as “sequence analysis” and “cluster analysis” designed to group together individuals who experience similar types of transitions. We place them into broad categories of “Entering the Labour Market”, “Getting More Education” and “Experiencing a Difficult Transition”. Broadly speaking, those who are Entering the Labour Market move into stable jobs before they reach age 19; those who remain in full-time education throughout our period of analysis are defined as Getting More Education; and those who leave education but move in and out of work are defined as Experiencing a Difficult Transition. 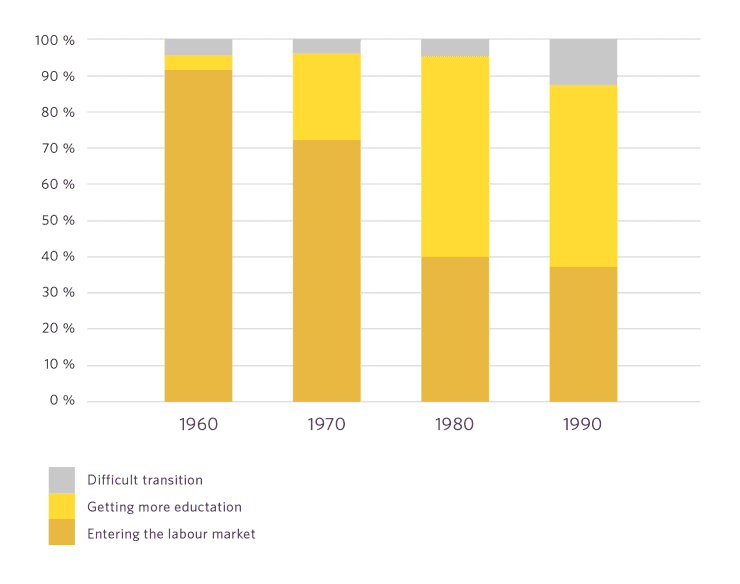 We first looked at how the size of these groups has changed over these successive generations. We found that the Entering the Labour Market group had declined in size over these cohorts from around 90% for those born in 1960, to under 40% among those born in 1990. This dramatic change is mainly explained by a growth in those Getting More Education, with this group increasing from roughly 5% to 50% over the thirty years. However, this is not the whole story. In addition, there has been an increase in the proportion of individuals who Experience a Difficult Transition, especially between those born in 1980 and those born in 1990.

We also explored how the composition of this group of individuals has changed between cohorts. Most strikingly, we find that both females and ethnic minorities go from being more likely to Experience a Difficult Transition to being less likely to do so.

“Family disadvantage is a strong predictor of young people experiencing a difficult transition regardless of the year they were born.”

There will be many reasons for these changes. It is probable that one is a decline in the proportion of young women who move quickly from education into an extended period of inactivity associated with starting a family. Another is that across this period the ethnic minority population of England has grown significantly in size, has diversified and has become more established; it seems plausible that these will have contributed to the relative improvement in their chances of experiencing transitions likely to be precursors of future economic prosperity.

This blog post draws on findings from “What young English people do once they reach school-leaving age: A cross-cohort comparison for the last 30 years” by Jake Anders and Richard Dorsett. The full research article is published in Longitudinal and Life Course Studies International Journal.