“Media literacy is a tool, not a subject in the educational canon”

Sabine Gysi: In Switzerland, there still seems to be a great deal of anxiety and resistance when it comes to e-learning. What about Germany? What changes need to be made so that e-learning can be introduced nationwide and what obstacles will have to be overcome?

Henning Mueller: As in all areas of teaching, what matters most are the teachers and their attitudes. They’re crucial. A school’s technical equipment clearly plays a role as well, although that will probably be a much less important concern in the future. The most likely issue will be access to a high-speed internet connection, since in the future everything will be handled through the internet. All schools will need such access, because ten years from now every child will have an internet-capable device. Perhaps we will have to establish a small fund for particularly disadvantaged children who lack such equipment.

But most important of all are the actors involved, the teachers. There is undoubtedly a generation gap; older teachers have more reservations. Anxiety is certainly a factor as well, and this is something that can be addressed through further training. Considerable efforts are being made in that area, but I’m not sure that the problem can be fundamentally solved. It might be better to take a pragmatic approach and assign teachers duties that match their skills.

A more important question, however, is how we see the role of e-learning as we seek to integrate it into the schools. There is a program in Germany called “Medienkompetenz macht Schule” – a name that suggests that media literacy is another skill to be taught to children in school, just as they are taught math and reading. The idea is that they’ll then be able to use a computer, and everything will be fine. However, when looking at the reality we’re living in and the jobs we’ll be doing in the future, it is clear that this is not the right approach. The fact is that all of the skills we want children to master are learned, applied and refined with the help of media. We should therefore integrate the use of media into every subject, as a method of teaching and self-regulated learning rather than a distinct subject. Media literacy needs to become a generally applicable skill.

SG: So you’re saying that it needs to be seen as a basic kind of competence, like writing or math skills.

HM: Yes, writing is actually a good example. You need it for everything. You need it in math, to write down formulas; you need it to compile your shopping list. It’s part of every aspect of your life. And as long as we see media literacy as a kind of box that contains skills like Microsoft Word, our efforts will not be very successful. That’s not what is needed for the school system of the future – which will be working with media content to a much greater extent than today. So our task is not to show a child how YouTube works, but rather to teach the child to work with content using a platform that may, perhaps, resemble YouTube. 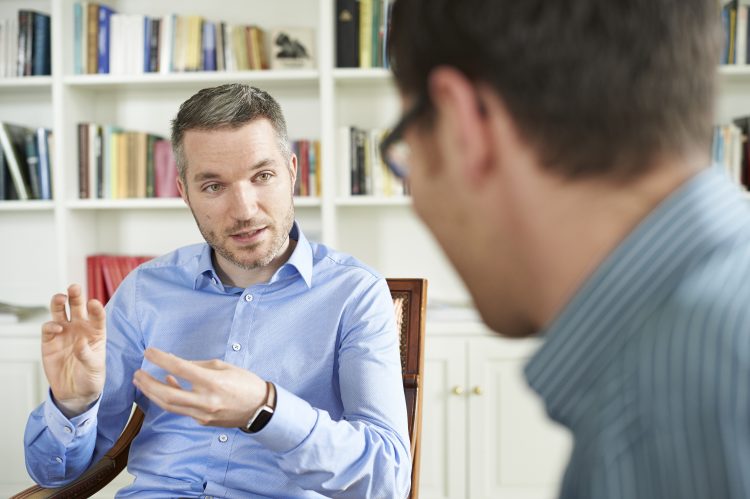 SG: So digital media should not be taught separately, but instead integrated into every aspect of classroom instruction from the very beginning.

HM: Yes. I think it’s myopic to teach digital media as a separate subject, independent of the rest of the curriculum. That would be like teaching language skills as a separate subject and not speaking at all in math class – only doing math problems. No one would do that, of course, since we obviously need to communicate. We should take a similar approach with digital media.

SG: What do teachers and parents think about this?

HM: As for most of the people I meet, they would probably agree that digital media should be integrated into the curriculum – but teachers often tell me that they just do not have the time to teach in this way. However, a certain subsample of parents, teachers and administrators also display a tendency to demonize media use. They tell children, “You’ll hurt your eyes” or “You’ll lose brain cells spending too much time sitting in front of a computer.”

HM: In some cases, unfortunately, yes. It’s such an easy and simple message. Children should go outside and play in the fresh air. By the way, I’m totally in favor of outdoor play. And I tell that to parents. We held two or three parent meetings during one of our studies (KIDS-WIN), and these types of questions came up. My response was that of course children should go outside and play after working through our computer-based training. That’s very important. But “protecting” children from using computers and tablets? A better idea would be to teach them to use these devices constructively and productively.

We have to ask ourselves: Ultimately, what skills do we want the educational system to teach? That’s a rather difficult question. I can list ten skills that people need today, but it’s likely that five of them will no longer be particularly significant ten years from now, and five different skills will have taken their place. Media literacy is not a fixed skill. Requirements change. We can’t determine today what computer skills children will need in the future, since the programs we teach them now may not even exist in ten years. And the internet-capable devices we have now may have become obsolete as well. For that reason alone, we mustn’t view media literacy as just another subject in the educational canon. Instead, we should make it part of classroom instruction, a tool to be used.

SG: Your research seeks to contribute to this necessary restructuring. How important is interdisciplinary cooperation in your field?

HM: My research involves economics and psychology. I think it would be helpful to work with the fields of biology and neurology. This could help answer questions about learning processes and find out more about the optimal conditions and timing for promoting children’s basic learning processes within the educational system. Political and economic perspectives are also important. How can I influence the political process to effect change? How do we need to think differently to make changes in this gigantic, complex system?

As academics, we have a tendency to try to find the optimal methods, interventions, sample size, and so on, seeking to arrive at some kind of truth. But that doesn’t mean a great deal to those who are working in the educational system. And every educational system is unique. Even within a single country, any two educational systems may differ so dramatically that it would be better to focus on each separately. While doing so, rapid and informative feedback loops will communicate to those in control of the system the consequences of their actions. It’s a process of learning by doing, a toolbox that researchers can provide. Robust feedback processes make it possible to improve a system.

It doesn’t work so well for someone from the outside to say, “This is how you should do it” – because that may well not be true. There’s no way of knowing. Before deciding that nothing can be done, it’s important to recognize that the way to learn is to try out various things. That sounds risky, but progress has never been achieved by continuing to do everything just as we have done it in the past.

Another advantage of digital learning modules is that they ultimately make it much easier to produce data and feedback on an educational system’s performance parameters. This represents an enormous opportunity, if you design interventions appropriately. If anything is important in a complex system, it’s high-quality monitoring of the relevant outcomes, ideally carried out in real time. And if I view educational systems as complex systems, which I increasingly tend to do, then perhaps I should focus more attention on that and less on how to design the perfect intervention.

Take the KIDS-WIN study, for example. It was conducted in 2013 and 2014, and the results are now hopefully to be published in 2016. Four or five years will have passed before the intended audience will be able to read the findings of our intervention study. Who knows whether what we have done will be relevant five years later?

Henning Mueller is an economist and psychologist who is conducting research projects on understanding and improving education systems. He is currently pursuing his PhD in Economics, supervised by Prof. Dr. Daniel Schunk (University of Mainz) and Prof. Dr. Ernst Fehr (University of Zurich).

The KIDS-WIN study was a large-scale intervention study, conducted with more than 1,000 primary school children in Germany and Switzerland, that evaluated the causal effects of a program designed to improve working memory and self-regulation. More information can be found here (in German).

Do we need a learning revolution, or rather accelerated evolution?