Technology is taking on an ever-growing role in the classroom. Computers, mobile devices, and apps are becoming more and more prevalent as are teaching aids like virtual assistants and robots. As of now, virtual assistants are winning out over robots, largely because they’re much cheaper. But one researcher is working on a robotic tutor that might make itself indispensable because of its ability to read a student’s emotional state.

Luis-Eduardo Imbernón Cuadrado, a domain manager at the information technology consulting company Sopra Steria, and his colleagues in the Department of Artificial Intelligence at the Universidad Nacional de Educación a Distancia in Spain created a robotic educational platform called Affective Robot Tutor Integrated Environment, or ARTIE.

Robots: Learning companions for our children

What are robots doing in schools?

This platform is designed to incorporate any sort of educational software meant for primary school children and assist the student through the tasks they’re working on in the software. It takes into account the students’ classroom profile, like their motivation to work and their competency (information provided by their teachers for now), and provides pedagogical support as the student needs it. However, ARTIE offers something special – it uses the students’ computer interactions to try and read their emotional state and help steer them through the task in a more effective way.

“In this first phase, we wanted to make a simplified prototype, that will be improved in future phases, that would detect emotional states,” says Imbernón Cuadrado. And those states, which aren’t pure emotions but instead more general cognitive-affective states, are detected through keyboard and mouse interactions, including the number and length of pauses in mouse movement and how quickly and often the student presses keyboard keys.

The researchers linked these measures to students’ emotional states in an initial experiment in which 20 students’ computer use was observed while their teacher guided them through a computer program. These measures are now used in the prototype to determine the students’ cognitive-affective state – whether they are concentrating on the task, are distracted, or if they are completely inactive. If students become distracted or inactive, ARTIE is designed to jump in and steer them back on course. 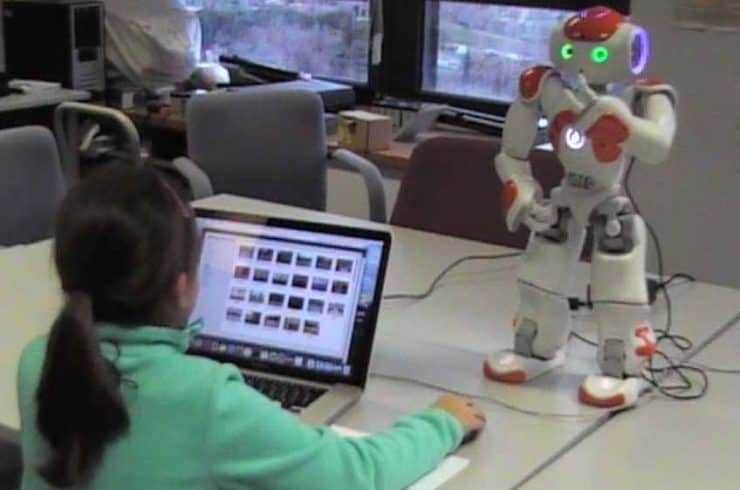 The robot tutor at work

So far, ARTIE has been tested out on two students through a robot prototype named MONICA and both kids were big fans of the robot. Both said they preferred working with a robot than working alone, that they liked MONICA specifically, and that they would want a robot in the classroom. They also said that they felt more relaxed working with MONICA than they did when a teacher supervised them.

However, neither student wanted a robot to replace their teacher. And the students’ good reviews of MONICA were expressed even though neither found it particularly helpful when it came to assisting them with their task. Both students gave low marks on MONICA’s ability to help them with the work.

“In this first phase, our prototype was not as accurate as we wanted,” says Imbernón Cuadrado, “but the result was good anyway and we are happy with the reaction to it.”

“ARTIE is a framework to support teachers, not to replace them.”

Imbernón Cuadrado is now working on the software, improving its accuracy, and introducing more cognitive-affective states including sadness, frustration, and anger. For this purpose, he’s working to incorporate more inputs such as video images for facial expression analysis, microphones, and wearables like bluetooth bracelets. He hopes to have a final version completed within five years. “Meanwhile, I will provide beta versions to test the response,” he says.

What Imbernón Cuadrado wants to make clear is that ARTIE is a framework to support teachers, not to replace them.