Caroline Smrstik Gentner: “My Love Affair With the Brain” is your first science documentary. Why did you decide to make a film about neurobiologist Marian Diamond?

Gary Weimberg: My partner Cathy (Catherine Ryan) and I had just completed a documentary on soldiers—when you’re in the army, you learn anatomy for the purpose of killing effectively. We wanted to go the opposite direction and look at telling the story of human anatomy for a positive, life-affirming reason. We found Dr. Marian Diamond on YouTube, where her integrative biology lectures at the University of California at Berkeley have had millions of views. We called her up and asked if we could make a documentary about her and her research, and she said, “If it will advance the cause of science, okay!” And then we had the privilege to spend five years with this amazing woman.

CSG: Why is it important to learn about science?

GW: I think learning about science is empowering for people. The scientific method is a very reliable way for understanding the world around us. Through questioning, research, inference, collecting data, and analysis we come up with information we can trust and rely on. By comprehending and learning to use the scientific method, we can deepen our understanding of the world.

But all too often science as a topic tends to suffer because it’s easy to make it boring. Even contemporary science, which is depicted via breakthroughs, new developments, and explorations of state-of-the-art science, becomes reduced to facts and figures, not much about people or personalities.

“When ‘hard science’ is only for the highly educated, we do a disservice to what science really can mean. It should be an easy road for all to enter the world of science, regardless of educational background.”

We wanted to bring science to people in a fresh way and chose to use biography as a way to encourage interest in a topic. Questions such as: How does the brain work? What is the scientific method? are fascinating questions all by themselves. But when these questions are being asked by a real person who is passionately engaged in finding the answer, science becomes so much more accessible.

CSG: Were you able to make a bridge from hard science to popular science?

GW: When “hard science” is only for the highly educated, we do a disservice to what science really can mean. It should be an easy road for all to enter the world of science, regardless of educational background.

It’s easy to assume scientists are behind impenetrable high walls. Academia is not called the “ivory tower” for nothing! My critique of science is the elitism. If the doors are not wide open, inviting inquiry and participation, that’s not helpful. 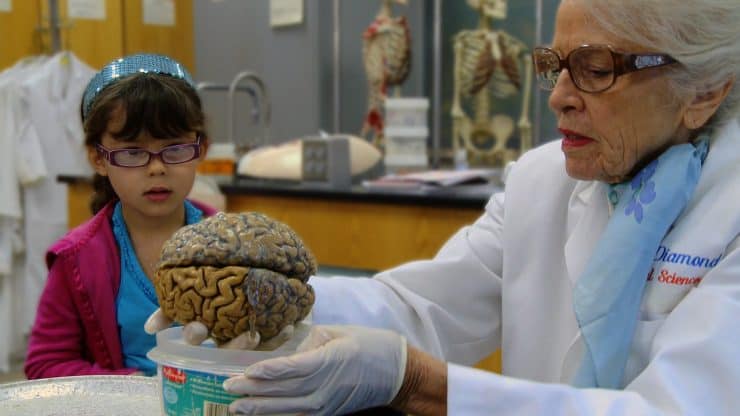 The science of Marian Diamond—science about brain plasticity—empowers us individually, since we all have a brain. Her studies show that living in “enriched environments” increases the capacity of the brain and allows each one of us to be an active participant in shaping our own brain. “Our own personal masterpiece: the mature brain,” she said at one point.

CSG: What is it about Marian Diamond that makes her story so engaging?

GW: She is the first person who found hard evidence of brain plasticity, which revealed that we are not fully determined at birth by our genetics. So in a media environment that is full of negative stories, Dr. Diamond’s story sticks out. This is fact-based good news! About your own brain! The knowledge and experience you acquire is yours forever. And it’s wonderful that the idea of “enriched environment” is now a dominant concept in child care and in senior care around the world.

Brain training: An attractive idea, but not as easy as it seems

by Pia Viviani and Dietsje Jolles / August 18, 2020
Learning in the 21st Century

Marian Diamond’s deep human engagement with her field is inspiring, and she is certainly a vivid character who has lived her life for science. She has so much joy in discovery, and when a viewer sees that, it is really contagious.

“There’s a tendency to think of science as ‘problem-oriented.’ Marian Diamond looked for what is possible, and the film celebrates that.”

CSG: How can a film about neuroscience be exciting?

GW: We worked hard to make audiences able to participate in Marian Diamond’s joy. She is not only a researcher, but a brilliant teacher. She could teach a four-year-old, or a 90-year-old, or a Ph.D. – each at the appropriate level.

Dr. Diamond knew how to ask questions that are powerful and life-affirming. I think there’s a tendency to think of science as “problem-oriented.” Marian Diamond looked for what is possible, and the film celebrates that with the general public. That’s why it’s been so popular with audiences so far. You see the smiles on the faces of people when they leave a screening.

CSG: Is Marian Diamond’s story a push for more women in science?

GW: I think it’s a push for more science, period. The issue of gender equality in science is certainly also present, but in a positive way that is so typical of her approach to everything. Dr. Diamond is proud to be a woman, and is an active participant in the lives of women scientists. She takes special interest in mentoring women, whether students or lab assistants. But she is a scientist first—not a “woman scientist”.

“When we started the film, we had no idea this would be a controversial film. We simply wanted to celebrate the human brain. But today, women’s issues and science issues have become very controversial in the U.S.”

She talked about being a woman in science, which is different. As one of the founders of modern neuroscience, it’s no exaggeration to say that Dr. Diamond changed science, and society at large. Her work is even more remarkable because it began during an era when so few women entered science at all. She just did the work and followed where her curiosity led her, ignoring disparaging comments and even active impediments from male colleagues.

CSG: Is there a political aspect to Marian Diamond’s story or work?

GW: When we started the film, we had no idea this would be a controversial film. We simply wanted to celebrate the human brain. But today, women’s issues and science issues have become very controversial in the U.S.

Even the concept of “what is a fact?” is suddenly up for debate. So the entire scientific method is now controversial—and this film presents the scientific method as the way to examine and describe the world, to differentiate between factual and bogus. We know that there is no such thing as “alternative facts.”

CSG: Your film was produced and released in collaboration with the American Association for the Advancement of Science and is showing on public television networks in the U.S. throughout March and April. What’s next?

Gary Weimberg is an award-winning documentary filmmaker in the U.S. His latest production with Catherine Ryan, “My Love Affair With the Brain”, looks at the work of neurobiologist Marian Diamond.