Should politicians be afraid of reforming educational systems?

The German people basically favor educational reforms. So why are these reforms so hard to pursue? If education policy is to be successful, it is crucial to provide the public with information to get voters’ support.

Why is our educational system the way it is? Why are children in Germany tracked into separate schools at such a young age, earlier than in most other countries? Why are final examinations for Germany’s three tiers of secondary schools – Hauptschule, Realschule and Gymnasium – not standardized nationwide? Why do we lack high quality data to compare student achievement across the German states? And why do many parents have to pay fees to send their children to preschool, although universities generally charge no fees?

If we are optimistic, we can hope that our educational system is shaped by research findings about how best to promote learning. If we are realistic, we will compare current practices with evidence about the best ways to do so. The results of such a comparison are sobering. Many aspects of our present system bear little or no resemblance to what researchers have been recommending in recent decades.

The gap between what is and what should be is often attributed to a combination of political forces and public opinion. It may be that voters simply do not want certain kinds of reforms. Anecdotal evidence for this argument can be found in the 2010 reform proposal for Hamburg’s schools, which – among other things – would have expanded elementary school from four to six years. In a referendum, voters rejected central elements of this proposal, although it had been unanimously approved by all four parties in the Hamburg parliament. The reform of Hamburg’s school system ultimately failed because of public disapproval.

To better understand the political and economic processes at work in Germany’s educational system, and thus also the extent to which reform is possible, we need to know what the public thinks about education policy. This is the focus of the annual Ifo Education Survey, which, under the direction of Prof. Ludger Wößmann, has been published since 2014 by the Center for the Economics of Education at the University of Munich’s Ifo Institute. As a representative survey of Germany’s adult population, it reveals what people think about a wide variety of important policy issues. 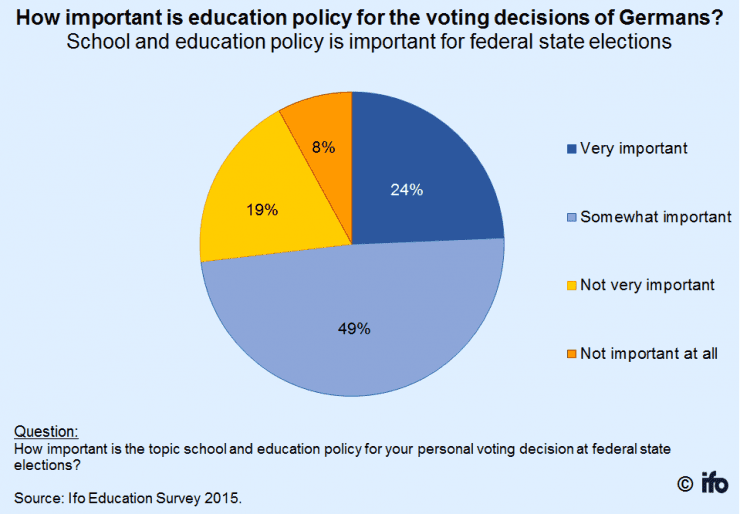 Overall, it seems clear that the German population is ready for a number of significant reforms, affecting everything from early childhood to universities. This is very good news for reformers. Implementing popular reforms that have been shown to have a positive effect on student achievement (and there are several examples) will benefit both students themselves and society at large. It will benefit politicians as well. Reforms that enjoy majority support are unlikely to reduce a politician’s chances of reelection. It is to be hoped that public support for certain reforms will lead politicians to take steps to improve our educational system. There are several areas in which most Germans favor fundamental reforms.

Early childhood education and care facilities, such as daycare centers, have become an integral part of Germany’s educational system, but parents are required to pay a portion of their costs. A clear majority of the population (77 percent) favors a change in this system and would like to see tax revenues used to cover such fees. Another important issue is quality assurance in daycare centers and preschools. Eighty-six percent of the population favors introducing binding quality standards, for example standardizing staff training and group sizes nationwide.

Agreement on the need to reform schools

The Ifo Education Survey has also shown that the German population favors reforming schools. Most German states require children to attend an elementary school in the district in which their family resides; 64 percent of respondents would like to abolish this requirement. Age at school entry is another issue; a majority (63 percent) believes that parents should have the option of delaying their child’s entry into first grade.

Reformers would also like to expand all-day schools. There is widespread support for the compulsory introduction of all-day schools nationwide; an absolute majority believes that Germany should move toward an all-day school system, with children remaining at school each day until 3:00 or 4:00 p.m.

These are just a few examples of popular reform proposals identified by the Ifo Education Survey. Most Germans also favor standardizing final examinations, university fees and educators’ salaries throughout the country.

Information is key to political support

In addition, the Ifo Education Survey has looked at whether information can change popular opinion. This is done with survey experiments: A random sample of respondents is provided with relevant information before answering a question that is also posed to a control group not given that information. When respondents were informed that many studies have found positive effects of early childhood education on children’s later success, they were considerably more likely to favor eliminating preschool fees.

When they were given information about current levels of spending on education, their support for additional expenditures declined. And when they received information about the earnings of university graduates relative to graduates of vocational training programs (apprenticeships), what had been a plurality opposing university fees was transformed into a plurality in favor of them. It is clear, then, that information can indeed have a substantial impact on public support for educational reforms.

A combination of political forces and public opinion may have prevented the implementation of long-overdue reforms of Germany’s educational system. The Ifo Education Survey has identified reforms that most Germans would support, and it has also shown how important information can be in shaping public opinion. These findings are encouraging, as they indicate that politicians can expect to receive majority support for a number of reforms that would improve the quality of education in Germany. We can only hope that knowing this will motivate them to act.

Patrick Maus and Katharina Werner contributed to this article.

Because of space limitations, this article includes only a few of the Ifo Education Survey’s findings. The results of the most recent Survey were published in September 2016, focusing on the opinions of teachers and ways of integrating refugees into the educational system. The Survey is scheduled to continue over the coming years, shedding further light on the role of public opinion in educational policy.

Can greater openness of the school system lead to equal opportunity?