Stereotypes, STEM, and a sense of belonging

Pernicious societal stereotypes can dissuade certain children from engaging in STEM. Fortunately, we can use children’s own social tendencies to counteract this. We can design activities that encourage kids to identify with math and to think of math as having a social component. Similarly, we can counteract tech stereotypes by giving young girls hands-on experience with programming robots. This sparks their early STEM interest, motivation, and feelings of self-confidence.

The importance of STEM (science, technology, engineering, and mathematics) learning has become increasingly evident. STEM involves critical and analytic thinking that are foundational to children’s future success. Parents are concerned about their children’s STEM achievement. Schools are implementing programs and curricula to teach STEM competencies. Countries are obsessed with raising their rank on international STEM assessments. What does science say about the factors that influence children’s STEM learning? What can be done to improve children’s STEM motivation and performance?

Adults associate math more with males than with females. I am interested in the origins of these stereotypes in children. Specifically, I want to know how and when children acquire this stereotype. Results from my research team show that children as early as second grade have caught this stereotype. By this tender age, children think that math is something boys do. This shows up when we ask children directly about gender and math, and it is revealed even more strongly when we measure children’s unconscious thoughts about gender and math.

“Cultural stereotypes – for example the stereotype that ‘girls don’t do math’ – affect children as early as second grade.”

For this purpose, we adapted a well-known adult measure, called the Implicit Association Test (IAT) to make it suitable for children. Using this method, we found that at an unconscious, implicit level, young children had the inkling that math = boys. By third grade, this had measurable effects on children’s math self-concepts.

The children followed this developmental pathway: ‘me = girl, girl ≠ math (a stereotype), therefore I ≠ math (a self-concept).’ One of the problems with these stereotypes is that they pigeonhole individuals. For example, someone might assume that a young girl isn’t good at math simply because of her gender. As children register these cultural stereotypes and begin to internalize them, it has the pernicious effect of changing their self-representations and aspirations for the future.

A sense of belonging

Because research demonstrates that children’s cultural environments can powerfully influence what they learn, I wondered if that fact could be harnessed to benefit children’s STEM learning. We used children’s intense feelings about social groups and their sense of ‘belonging’ to groups to improve their math motivation. To make math a social experience for children, we created novel social groups, which scientists call ‘minimal groups.’ We randomly assigned four-year-olds to wear either a green t-shirt or an orange t-shirt. When they received the green t-shirt, they also got a little green flag and sat at a table with a green table covering (see figure below). We told them that the ‘green group’ liked to do math and the orange group did other things. Then we gave the children math problems. 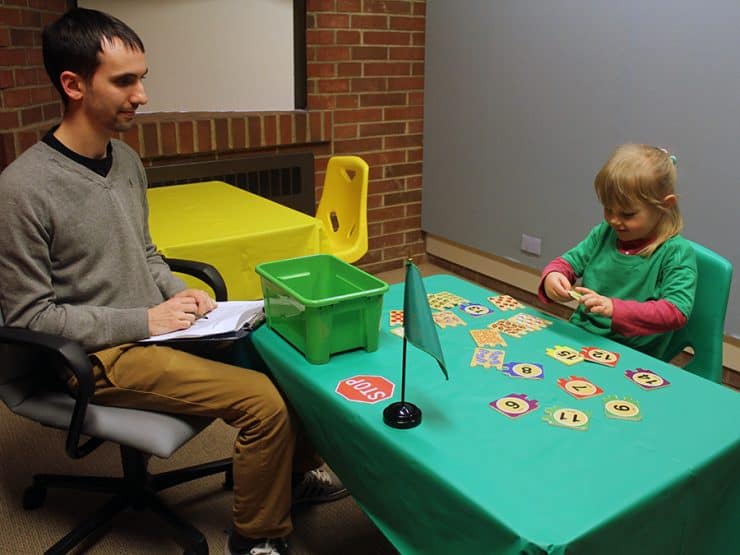 “It is encouraging that math problem-solving, persistence, and interest are highly malleable.”

We discovered that the children did better on the math problems if they were in the math group. They also persisted longer on the hard problems and said they like the math games more. It is encouraging that math problem-solving, persistence, and interest are highly malleable. Math interest and performance is not set in stone but can be changed according to whether the children think they are part of a social group that does math. We are now designing interventions based on this ‘sense of belonging’ to a social group so that they can be used in real-life classrooms.

STEM is not all about math. Societal stereotypes about female’s involvement in technology, such as robotics and computer programming, are even stronger than they are for math. Females are deeply underrepresented in Silicon Valley and in the tech industry in general. We found that as early as first grade girls and boys strongly believe that boys = robotics and boys = programming. Girls also tend to say that they are less interested in robotics and programming than boys do. One explanation for this discrepancy could be differential experience with robots and programming. Parents and friends are more likely to give robots to young boys than to young girls. So we made a child-friendly robot and showed girls and boys how to program it using a smartphone. The kids loved the activity!

“Societal stereotypes about female’s involvement in technology, such as robotics and computer programming, are even stronger than they are for math.”

After they were done, we measured their interest and feelings of self-confidence in handling robots and programming. Girls now reported the same levels of interest and self-efficacy as the boys. The next step is to test how long these effects last, and whether giving young girls specific kinds of positive experiences with technology helps them resist stereotypes and increase their STEM motivation over the long term.

Science shows that children are social from birth. This fundamental fascination and attention to other people ‘like me’ starts in infancy and has specific brain correlates. By preschool and elementary school kids are avid detectives trying to uncover where they ‘belong’ and what others in their ingroup are expected to do. This also applies to their involvement in academic subjects such as STEM. We can counteract tech stereotypes by giving young girls hands-on experience with programming robots. This sparks their early STEM interest, motivation, and feelings of self-confidence.

“Science provides information that can help society become stronger, fairer, and more productive. And the keys to achieving this begin much earlier in the educational pipeline than we previously believed.”

Not enough attention is paid to the ‘non-academic’ socio-cultural factors that influence kids’ STEM motivation. These factors can either draw children towards or push them away from STEM early in their lives. Beyond the issues of equity, society will benefit from helping our children resist stereotypes. This will help us achieve a more diverse and inclusive workforce.

Science provides information that can help society become stronger, fairer, and more productive. And the keys to achieving this begin much earlier in the educational pipeline than we previously believed.

“Coding is a creative tool for self-expression and solving problems“

Interview by Franz Tschimben / March 12, 2020
About the author

The Cognitive Development Society (CDS), which aims to provide a unified voice for the wide range of scholars, practitioners, and others who are interested in change and continuity in the intellectual processes that support mental life, held their 2017 biennial meeting in Portland, Oregon, on October 12-14. The program included cutting-edge research on analogy, imagination, executive function, risk perception, spatial cognition, numerical cognition, moral cognition, causal inference, and language development. More information about the program can be found here.

The author of this blog post, Andrew N. Meltzoff, is the co-chair of a symposium about how children acquire social biases, prejudices, and stereotypes.