What does it take to scale quality education?

After identifying the core ingredients, real-time scaling labs are to shed light on what works
by Jenny Perlman Robinson
November 20, 2017 / 1 Comment

Scaling – expanding and deepening the impact of an initiative – often seems like it should be common sense. When a simple, impactful, cost-effective solution to a pressing problem is developed, how can it possibly not take off and reach many more people and places? Why wouldn’t everyone immediately jump on expanding an effective innovation? In reality, however, scaling is much more complex, and a myriad of both technical and political factors can prevent even the best innovations from scaling their impact.

Take the case of improved cook stoves. Nearly 3 billion people cook food and heat their homes with stoves fueled by wood, coal, or animal dung, whose harmful fumes can cause serious health issues. Yet despite decades of initiatives to get improved cooking stoves into the hands of the poor, scaling up usage has been remarkably slow.

In India, for example, one study found that despite families receiving such stoves almost for free, many did not actually use the stoves, preferring to cook with traditional methods that better suited their needs, or used both old and new stoves simultaneously, diminishing the health benefits. Scaling demands much more than just a better stove design; it requires considering a whole host of complex technical, political, and social factors that may at first glance seem tangential to the stove itself.

“A myriad of both technical and political factors can prevent even the best innovations from scaling their impact.”

Similarly, scaling in education is far from straightforward. Over the past 150 years, the expansion of schooling has been hailed as one of the most successful scaling stories, with tremendous progress in access made in the past two decades alone. Between 2000 and 2015, primary school enrollment in developing countries rose from 83 percent to 91 percent and the number of out-of-school children worldwide fell by almost half, from 100 million to 57 million.

In spite of these successes, the scaling of children’s learning and the development of core competencies has not kept pace with increased enrollment. Today, more than 387 million children of primary-school-age and 230 million adolescents are not achieving minimum proficiency levels in reading and math. UNESCO reports that “the vast majority of children and adolescents who are not learning are in school,” so we know that simply getting kids in a classroom is not enough.

“We know that simply getting kids in a classroom is not enough.”

At the same time, while there is growing evidence of what education interventions help improve children’s learning and innumerable pilots that have achieved learning successes on a small scale, much less is known about how to expand these effective practices to reach many more students.

Given the scope of the learning crisis, countries cannot achieve the United Nations’ Sustainable Development Goal 4 – which calls for high-quality, universal education for all children and youth from early childhood through secondary school by 2030 – with business as usual. Accelerated progress is critical to ensuring that every child is equipped with the knowledge and skills necessary to make a healthy transition to adulthood. As a result, there is demand for greater information and guidance on how to design, finance, and deliver initiatives that are commensurate in scope with the challenges of learning across the globe.

Indicators for child and youth development to inform policies and programs

Millions Learning, a project of the Center for Universal Education (CUE) at the Brookings Institution, addresses this question of how to scale quality education for all children and youth.

In the first phase of the Millions Learning project (2014-2016), CUE undertook research to discover how policies and programs that have improved learning in low- and middle-income countries have gone to scale. Launched in April 2016, the Millions Learning: Scaling up quality education in developing countries report focuses on how this change has happened and what the public and private sectors and civil society can do to more effectively scale up quality learning.

Drawing upon literature and case studies from around the world, the report identifies 14 core ingredients that, in different combinations depending on the context, contribute to scaling effective practices and approaches that improve learning. They include essential elements for designing, delivering, financing, and enabling the scaling of quality education. 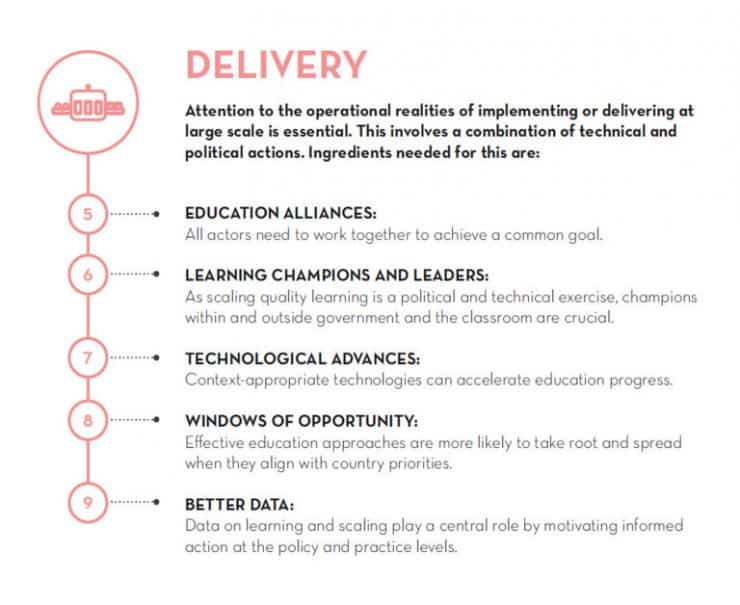 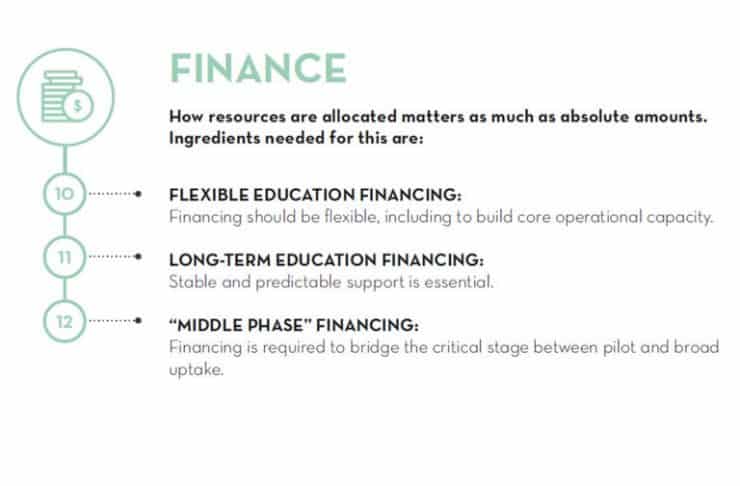 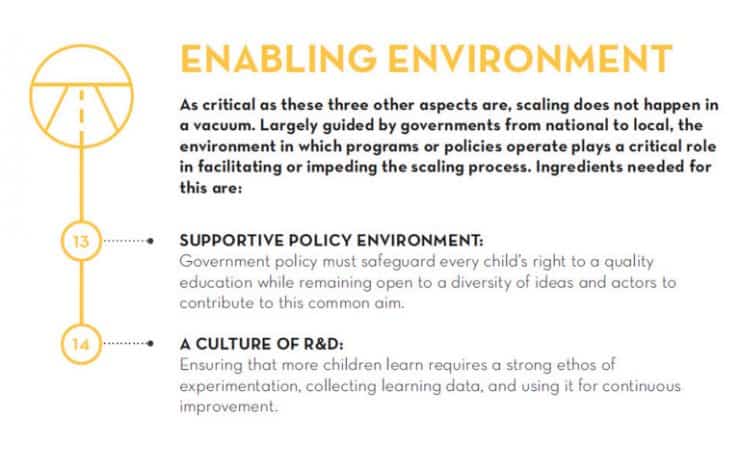 To hear examples of how these ingredients have supported scaling quality education initiatives, watch our video.

The Millions Learning report was not intended as an end goal in itself, but rather as a tool to catalyze action. This next phase of work focuses on translating the lessons from the report into action to improve education policy and practice at scale. We have heard from policymakers, practitioners, and funders from Detroit to Dhaka to Dar es Salaam on the need for more information on the enabling factors behind scaling as well as practical guidance on how to scale in order to accelerate progress towards learning for all.

“This next phase of work focuses on translating the lessons from the report into action to improve education policy and practice at scale.”

To address this need, CUE is launching Real-time Scaling Labs in partnership with local institutions in a number of countries. The labs will focus on generating more evidence and practical recommendations around the process of scaling in global education and strengthening local capacity to scale impact. They will bring together key stakeholders in a reflective process to learn from, support, and document existing efforts to scale learning interventions as they unfold in real-time, drawing from the Millions Learning 14 core ingredients.

In Côte d’Ivoire, we are partnering with the Jacobs Foundation to design a Real-time Scaling Lab focused on the Transforming Education in Cocoa Communities (TRECC) initiative, which brings together the government, cocoa and chocolate companies, and non-profit organizations to improve the quality of education for children living in cocoa-growing communities.

“Together with our partners, we hope to contribute to strengthening a local ecosystem that enables inclusive and equitable quality education with lifelong learning opportunities for all children in Côte d’Ivoire.”

We will collaborate with local stakeholders to craft a lab that supports and learns from the process of adapting and scaling early childhood development and education initiatives. Together with our partners, we hope to contribute to strengthening a local ecosystem that enables inclusive and equitable quality education with lifelong learning opportunities for all children in Côte d’Ivoire.

Scaling isn’t easy or guaranteed. But there is a lot we can learn from where and how it is happening to increase the chances of spreading effective practices and reaching many more children.