Why do people with similar starting conditions develop so differently throughout their lifespan? It’s still a mystery. But cutting-edge researchers, among them Elliot Tucker-Drob and Andreas Brandmaier, are working hard to solve that puzzle. In this interview, they talk about the complex process of development and ponder what might be done to promote factors that positively influence a child’s development.

Sabine Gysi: It never ceases to fascinate me how different we all are, in both character and cognitive abilities, even when we have grown up in very similar circumstances. Can you explain why this is?

Elliot Tucker-Drob: It is still an open question why people – even siblings who are raised in the same family – have fairly different trajectories of psychological development. There has been a lot of debate about that.

We are only about 50 percent genetically related to our full siblings, with a random 50 percent of our genetic material coming from each of our parents. Indeed, research finds that part of the difference in siblings’ diverging psychological trajectories is associated with genetic differences between them. There are a lot of mechanisms that may underlie these genetic effects, and environmental experiences are likely to be crucial factors in how genetic differences come to be expressed.

But even when we look at identical twins – who have almost identical DNA – raised in the same family, we often see that they, too, diverge in their psychological development. We see it in things like cognitive function; we also see it in the case of severe psychopathology.

Some of these differences may be attributable to differences in the experiences of each sibling within a family, but some of them may also be random. There’s a lot of chance and randomness in the world, and hence also in the patterns of how we develop.

SG: What’s the initial trigger for this randomness in the development of animals or human beings?

Andreas Brandmaier: It can happen on a microscopic level: Whenever a new cell grows in an organism, it can either grow normally or its growth can be slowed, stopped, or accelerated. But there is also the macroscopic level; there are “shocks” from the environment that are not shared, even when identical twins are growing up at the same time and in the same place.

The various factors that shape our development into distinct individuals are difficult to disentangle: Your genes influence your development, but how you develop then influences the environment you pick, and that environment may bring out other genes. That can make certain other genetic dispositions more important, which may in turn cause you to choose yet another environment. The process that unfolds is thus based on reciprocal interactions.

“There’s a lot of chance and randomness in the world, and hence also in the patterns of how we develop.”

In earlier work using animal models, we have shown that genetically identical mice may grow up in identical environments, that is, in the same cage, and still begin to diverge in their development. They start to behave differently, they use their environments differently, and they interact differently with each other. Even their brains grow differently. This shows that it’s not the genes alone, nor the environment alone. And the same is true for humans. Genes and the environment interact to produce differences between one human and another, but development itself is a third factor that shapes the life course.

What has struck me as particularly interesting in our findings is that we tend to see greater individual differences when there is more opportunity for complexity in the environment. So when the mice were raised in bigger, more complex cages, they diverged to a greater extent, for example in body weight or brain weight.

ETD: In my own work, I have looked at people’s genetic dispositions when it comes to motivational factors. Some children have dispositions that lead them to become more engaged in their schoolwork; it’s the experience of studying or the experience of paying attention in the classroom that stimulates their learning. So, in this example, it’s not that the genes stimulate learning directly; the genes stimulate exposure, which in turn stimulates learning.

“Genes and the environment interact to produce differences between one human and another, but development itself is a third factor that shapes the life course.”

This type of process may also occur in the context of personality and behavioral risk. Take, for example, adolescents who are genetically disposed toward a personality trait known as sensation seeking. These individuals may find risk-taking behaviors, such as substance use or law-breaking, to be psychologically rewarding. But they are also likely to spend more time with risk-taking peers. Doing so may further heighten their risk for substance use and law-breaking, above and beyond the risk associated with their own sensation seeking. In short, genetic disposition and risky peer groups may combine and interact to amplify risk even further.

Or take the example of a child who is unusually inquisitive in her first year of life. In the beginning, she probably won’t receive much more environmental stimulation than a child who isn’t genetically disposed to be as inquisitive. But after a year spent reaching every day for stimulating objects and responding positively when caregivers speak to and interact with her, she will have accumulated hundreds or even thousands of hours more experience with stimulating environments than a child who is not as genetically disposed towards inquisitiveness.

ETD: Going back to the dynamic developmental processes that Andreas and I have been talking about, we have observed and documented that children who are more motivated tend to seek out and evoke more stimulation, and that children who are more sensation-seeking tend to seek out and evoke risky experiences. Depending on our goals, we may wish to either encourage or discourage these dynamic processes.

We can think about children’s learning environments as a system, and consider how this system might be tweaked: We may want to constrain some processes and enhance others, depending on what our goals are and what outcomes we’re interested in.

We may, for instance, want to encourage the positive feedback that is given to children who are eager to learn. At the same time, we may try to boost the amount of attention or positive stimulation that children receive when they aren’t as eager to learn, and we may wish to limit the range of environmental risks that sensation-seeking children are able to expose themselves to.

SG: Do you think the educational systems we have today take these factors into account and bring out the best in children, helping them develop into independent, successful, and happy adults?

ETD: Recent meta-analytic evidence indicates that full-time formal education is the most effective experience yet to be identified for increasing learning and producing lasting positive social outcomes. I’m sure that there are lots of different ways to improve children’s outcomes, and current educational curricula are unlikely to be optimal. However, it is clear that formal education makes a real and lasting difference in children’s lives.

SG: Speaking of advanced age: As people grow older, they tend to become more unfocused and forgetful. Why is that?

AB: Research shows that individual differences in cognition increase from early to late adulthood and into old age. This brings us back to our initial question: Why are people different and what are the features of their lifestyles that cause them to differ?

There is a lot we don’t know about this, and there may be various reasons why people differ. We can assume that we are exposed to all sorts of positive and negative influences as we grow older, and thus there is a greater chance that the experiences that shape our individual life course are different from those of our age peers. Furthermore, some studies have found that genetic effects are magnified at older ages – so that, for instance, certain adverse genetic effects add up over time or reinforce each other.

SG: Elliot, you were recently awarded the Max Planck-Humboldt Medal. You’re now planning to intensify your collaboration with researchers in Germany, including Andreas. A question for both of you: What kinds of questions will you be trying to answer in your joint research projects?

AB: We have a lot of ideas! For one, we want to continue to study individual differences in people’s development over their lifespans – this is definitely an interest we share. With my background in computer science, I’m particularly interested in developing algorithms that can help us find patterns in the large datasets we have available. In the EU-funded Lifebrain consortium, we have gathered observational data on the development of the brains and cognition of 6,000 European research participants, collected in 11 European brain-imaging studies in 7 countries, and we want to find out why these people differ from one another.

“We can think about children’s learning environments as a system, and consider how this system might be tweaked.”

For example, we can cluster those whose lifestyles share certain patterns and then use machine learning to help us understand these patterns and how they relate to beneficial outcomes. We plan to generate new hypotheses about individual development, which we will need to take back to the lab or some other controlled environment to determine whether certain factors, such as changes in diet or sports interventions, have an impact on cognitive development.

ETD: Yes, we’re both passionate about this research. I believe that some of the most exciting work in the social, behavioral, and biological sciences is going to come out of developing methodological tools that will enable us to answer questions that we haven’t even attempted to answer before, or to answer questions in a better way and with greater certainty than we’ve been able to in the past. We recognize that these methods are important not just because of the beauty of the algorithms, but because they have implications for answering important scientific questions.

SG: In your work with these large datasets, how important is open data?

AB: Open science and specifically open data, which means that people share their datasets without restrictions, are crucial to our research because we rely in part on meta-analysis techniques, which involve re-analyzing published data or meaningfully combining them to better understand the effects that we’re interested in. With a meta-analysis, you look at a field at large and at the effects that researchers throughout the discipline and across countries are finding, and that allows us to better quantify the magnitude and variability of effects.

The open science movement, first and foremost, helps us make more research data available by providing researchers with the necessary technological infrastructure, but it also offers new incentives to share research data, materials, and methods. The ultimate goal is to help us do better science by achieving full transparency with respect to the origin of scientific findings. 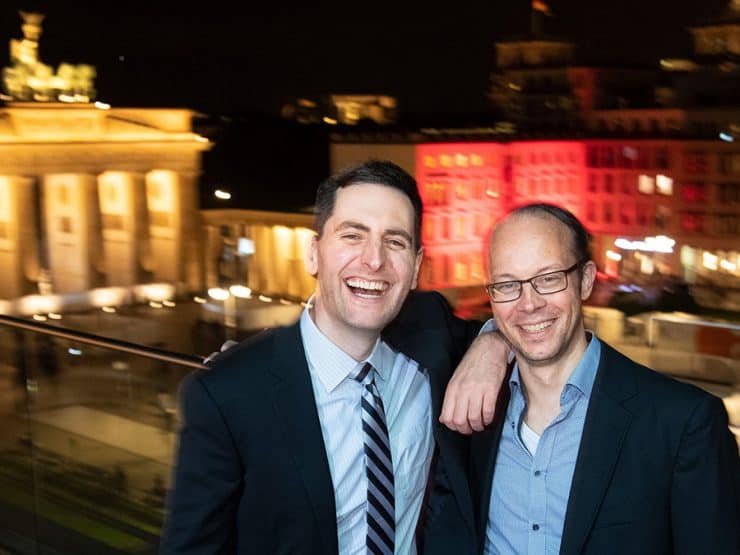 Andreas M. Brandmaier is a senior research scientist at the Center for Lifespan Psychology, Max Planck Institute for Human Development in Berlin, Germany, and a fellow of the Max Planck UCL Centre for Computational Psychiatry and Ageing Research. In his research, he develops methods and computational tools to answer methodological challenges of lifespan psychology and cognitive neuroscience. His primary research interests are interindividual differences in behavioral and neural development, brain-behavior relations across the lifespan, optimal study design, and the adaption of data mining and machine learning approaches to psychological research.

Elliot Tucker-Drob is an Associate Professor of Psychology at the University of Texas at Austin. His research uses methods from developmental psychology, genetics, neuroscience, and human ecology to address the questions of how and why different people progress along different life trajectories. He is particularly interested in how genetic variation combines and interacts with social, economic, and educational experiences to influence cognitive development, academic achievement, personality, and psychiatric health from infancy through late adulthood. Elliot Tucker-Drob is a Jacobs Foundation Advanced Research Fellow 2018-2020.